As a non-religious person, I believe in a few things: the laws of physics; evolutionary selection pressure; and human potential.

Laws of physics describe the mass and energy that lay the groundwork upon which life is built. Selection pressure changes the features of living things over time as they compete for survival and reproduction. And human potential looks forward at what our species can accomplish with all that’s been given to us by these forces.

For humans, having been honed by evolution for millions of years to become the most advanced species on the planet, we should be on the path to wild success. And yet, like many people, I often find myself feeling frustrated, angry, or afraid of how life on Earth is progressing in the 21st century.

For a species so advanced, we are surprisingly disconnected from our past and the paths that brought us to where we are. It is this story of human evolution that has captivated my attention for the last decade and that, I believe, holds the most promise in allowing modern humans to realign with human nature.

I foresee a future in which an understanding of our innate biological and psychological programming will help us alleviate much of our internal discord, help us to understand one another, set us on a path to preserving our planetary home, and open up opportunities to tap into potential we have only dreamt of.

My goals in starting the blog you are reading are as follows: First, I hope that sharing some of my observations and insights, which apply an evolutionary lens to some of our most fundamental human struggles, will add a positive influence to global conversations and nudge humanity in the direction of fulfilling our highest potential.

Second, I hope to use it as a practice to remind myself, on a daily basis, to keep up with activities that I have found helpful to promote physical and mental health and wellbeing and to offer these ideas as suggestions for others who also want to live more in line with our biological and psychological nature.

Right now, humans are on the cusp of a trajectory toward either utopia or extinction, which could easily be determined within our lifetimes. Perhaps it’s already too late to shift the balance; or, perhaps we just haven’t yet discovered the depth of our power when we truly come into alliance with one another and ourselves.

Both the danger and the opportunity presented to us are of frightening proportions. Will we take this chance to redefine how we’ll go forward as a species?

For most of my life, as a secular humanist, I struggled with the concept of spirituality and found it difficult to find a definition that resonated with me. A few years ago, two books appeared which helped me reconcile this.

Brené Brown, in The Gifts of Imperfection: Let Go of Who You Think You’re Supposed to Be and Embrace Who You Are, provides a definition of spirituality that transcends any theological concepts:

“Spirituality is recognizing and celebrating that we are all inextricably connected to each other by a power greater than all of us,and that our connection to that power and to one another is grounded in love and compassion. Practicing spirituality brings a sense of perspective, meaning and purpose to our lives.”

So, what is that power, greater than all of us? As I read Pema Chödrön’s book, The Wisdom of No Escape and the Path of Loving Kindness, I realized that, without limiting any other possible beliefs, it is enough to consider that connection to be the shared experience of the human condition: from what it means to have a body, to what it means to navigate the social world full of emotions — that “tragic yet comic drama that we all continually buy into.”

I highly recommend these two books as foundational thoughts about coming into alignment with oneself and others. 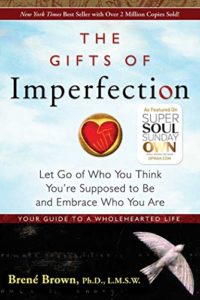